UKIP Surge Drops Back but Neitherr Labour or Tories Benefit 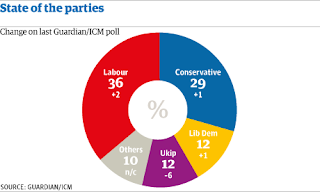 I've always compared UKIP with the SDP in terms of its support and we do perhaps see a suggestion that the 'party of protest' is witnessing one of the characteristics of such phenomena: fading success once the spotlight of attention moves elsewhere. It took two elections and half a decade for the SDP but after the excitement of the local elections it really does seem as if voters have had a longer term think and placed Farage's vehicle in a more realistic place: level with the Lib Dems at 12%- a 6% fall from last month, though a 1% increase for Clegg's party. Does this mean their bolt is shot? By no means. They can still influence the outcome of many contests at that level of support, but it does mean that Tory MPs who feared imminent disaster and meltdown, were overdoing it a bit.

Labour's lead at 7% is consistent but not what it should be if victory in 2015 is to appear even a strong possibility. It also illustrates that the big push by Balls and Miliband to appear tough on the deficit has not really been noticed yet by voters. Any elation at the Tories slumping from 45 to 29% approval on the economy is also negated by Labour's own fall from 29 to 19%. A twinge of elatioon might be justified however, on perceptions of party unity. Last month 65% felt Cameron had the backing of his party- this month, it's down to 29%. Labour meanwhile is seen as pretty united behind Ed Miliband.

On the 'empathy' axis- 'does he understand people like me'- Cameron sees a slide downhill with only 29% saying yes and 65% saying no. Ed usually scores well on this but also ends up with a 5% negative score: 41-46%. :Much too early to get much of a handle on 2015 but it seems neither big party is currently trusted by voters: Cameron seems to be floundering and his much vaunted leadership skills cast into doubt. Ed's position is even more desperate. As for Clegg, he might just end up holding the balance of power again, courtesy of UKIP and the nationalist parties.

I'm a huge admirer of Max Hastings as a historian- his recent book on world war two was brilliant. But I've just heard him on World at One, burbling nonsense about the Kenyan victims of colonial torture. William Hague has announced the award of some £20m in compensation to over 5000 claimants against the terrible treatment; they will receive around £2500 each. Hastings lambasted the decision. Judges had lost their minds to make such awards. Which other ex imperial countries would do the same? We must be mad he raged. And all on the basis of dodgy verbal evidence regarding things which happened 60 years ago..

Martin Day, the claimants' lawyer was relatively gentle in his demolition of these staunch Telegraph- Mail views. There is vast amounts of written evidence- much of it in government archives. There is the book by Ian Cobian, Cruel Britannia, a carefully documented piece of research. There was the evidence of 'Naomi' on the programme who attested to how a bottle being thrust inside her when she was close to childbirth; how her husband was castrated and her children killed.

It seemed Max's only complaint was that it was so long ago and that other nations wouldn't have done it and many more claimants would now come forward to claim. Well, I think that any decent person would think we owed some kind of redress to people who had been so treated; the passage of time makes no real difference; and, as Day commented, several other nations have paid out similar compensation, including Germany to Israel. Max Hastings should hang his head in shame for perpetrating such disgraceful attitudes. 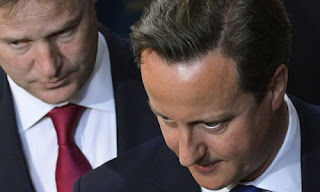 I can recall Cameron promising back in May 2010 to tighten up the rules on lobbying, predicting it was 'the next big scandal waiting to happen.' Since then we have seen lobbyists being hyperactive in seeking to hive off parts of the NHS and remove planning laws to make the work of developers much easier. If we look over the Atlantic we see a government operation which is so in the thrall of lobbyists that legislation to control the sale of firearms was derailed despite the fact that 90% of Americans were in favour of such measures.

The revelation that Sir Patrick Mercer, plus three peers were willing to take money in exchange for lobbying on behalf of an autocratic government, is disappointing and an indictment of promises made but unfulfilled. Francis Maude, the Cabinet Office minister, suggested it was the fault of Nick Clegg who is in charge of constitutional reform, and in theory the lead minister.

But my suspicion is that the Tories are not too unfriendly to the knock on the door from their friendly lobbyist and that this measure, so anticipated by the PM himself, has been nudged onto the back burner.  Now suddenly, when it's too late, the government are galvanised into promising something they should have done ages ago This is yet further evidence that this government has long ago lost its way and is desperately flailing to regain credibility.