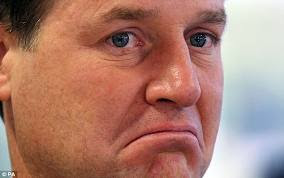 I never used to concentrate when earlier Lib Dem conferences were being held. They were merely 'voices off', something to be aware of but not necessarily to focus on. Well, now I do; as one leg of the coalition-even though the Tory right-wingers hate to admit it- some won't even try- they have a veto over whatever Cameron and Osborne might wish to do.So what has this year's event told us?

Quite a lot I think. Firstly the party has decided it's too late to sever the connection with the Tories; they are in it for the whole nine yards. It might have been possible to pull out a year ago, when things were still in a kind of flux, but now, their future is inextricably bound up with the coalition and that means with the prospects that the economy will recover by 2015. It's a huge gamble, which maybe not all party members- what's left of its membership- fully realised they were committing to back there in the rose garden in May 2010. Secondly it follows that Nick Clegg intends to continue to lead his party through until the election. He is the least popular politician in the country but his party, rather as Labour had to with Gordon, has to stick with him. He still has support from the senior figures including Ashdown and maybe even his rivals might like to see him absorb some more of the inevitable flak before making any move against him. Inevitably Vince Cable is now established as the guy most likely to step up to the plate in the event of Clegg going, for any reason.

But I don't think Vince is telling Nick to 'stand aside' Gordon Brown style. His disloyalty is being disguised as loyalty until the moment for real disloyalty arrives... which might not be until 2015. And who knows how many seats any leader will have at that time to preside over or to make alliances with? One column this morning suggested Nick 'is trying to turn the Lib Dems into a party that can win by first past the post. This is a really silly suggestion as it must be clear that every leader of the Liberals and their successors has been trying to do just that- it's just that they have been unable to attract more than a small percentage of the vote. And, as all the polls suggest, it might be very small indeed by 2015.

What about the chances of a coalition with Labour? Well, a really interesting analysis of this possibility is offered today by Martin Kettle in The Guardian. He is all in favoiur of one as soon as possible and suggests work begins on the project immediately. I wonder if Ed is listening and will emit a signal from his Manchester conference. I suspect that if it comes, it will be aimed at Vince rather than Nick.

When the Mask Slips 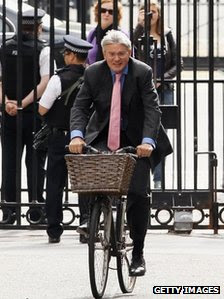 Having arrived back from a wonderful newly married break in the Languedoc, I was greeted by the Chief Whip's appalling splenetic outburst against a House of Commons copper and a nation as mired as ever in the miseries of darkening nights, economic gloom and plummeting autumn temperatures. I thought the best comment on Mitchell was by Jonathan Freedland yesterday. He links it with Mitt Romney's 'entre nous' chat with fat cat donors when he suggested virtually half of US voters are not only addicted to government handouts and pay no tax but also believe they are entitled to such state funded largesse.

In both cases there is a strong element of class hatred and entitlement. Mitchell and Romney both think the 'plebs' are lazy and undeserving and ought to 'know their place'. Both also think they are entitled to govern over the lot of us, plebs and all, because they are born into success and surrounded by its trappings. Selfishness and arrogance sits in the same place on the right-wing spectrum, whether in Westminster or Washington.

More's the pity that Mitchell's low profile job means he will survive this little hic-cup; behind his mask Dave and his Chancellor probably think along the same lines anyway. Yet Romney seems to have embarked, with a death-wish velocity, into an orgy of self destructive Clegg-like campaigning. Against a president who was low in personal ratings, struggling to lead a flaccid economy out of the doldrums whilst lagging the Republican in campaign funding he has transformed a dead heat into a current six point lead. I'm sure the battle is by no means over but so far Obama has been extremely fortunate in the person the fat-cats chose to carry their banner towards 6th November.

Skipper off to Get Married and Honeymoon in Carcassonne 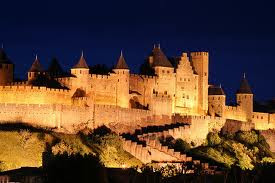 Yes, it's my third time in the marriage lists and I'm really looking forward to it on Saturday when my life will change I hope, permanently; taking place on the western side of the Pennines before returning to live on the eastern side in Leeds with my new wife Carolyn.

Then it's off to Carcassonne in the Languedoc for a brief honeymoon. Ever since I saw a picture of this medieval city I've been really keen to visit. Might even get some sun down there. So it's no blogging until I return to face a tough autumn's term of work. Hooray! 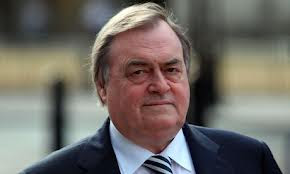 I knew about the elections; I knew John Prescott was standing in the north-east; but I did not know these elections were organised on such an idiotic basis. It really does make you wonder at the competence of our rulers when things like this are served up in the name of democracy. If you don't believe me, read on

1. Serving magistrates are not allowed to stand, despite their highly relevant experience as a judge has ruled there would be a conflict of interest Details of the post can be found here.

2. We all know John Prescott is standing but it seems in a poll in May that even two years after they were proposed, less than 20% of respondents knew of the election or understood what the commissioners were intended to do. In reality they will hire and fire top policemen in the 41 police areas, establish local policing priorities and budgets and advise on council tax rates

3. Some candidates were disbarred from standing in consequence absurdly, of minor convictions when in their early teens.

4. The government has refused to send out information to voters about the candidates.

5. It has proved very difficult to find candidates prepared to run. Why? Well, apart from all the ignorance and muddle, they have to raise a deposit of £5000- ten times the amount required to stand for parliament- which will be lost if less than 5% of the vote is gained. Candidates for local council seats pay nothing by the way

6. The upper expenditure limit allowed on campaigns is extremely high- nearly a quarter of a million in Kent for example. Cash strapped candidates wonder how they will compete with well funded ones. However few local parties have the cash to play this particular game meaning the campaigns will be small scale and lack lustre.

7. The Electoral Reform Society has predicted- surely correctly, that turnout will be minuscule and the legitimacy of this brave new world of local police accountability will be slim to vanishing point.

How the American models for this exercise must be curling their lips in contempt at how the alleged home of 'The Mother of Parliaments' has messed this one up.

A Reshuffle Lurch to the Right 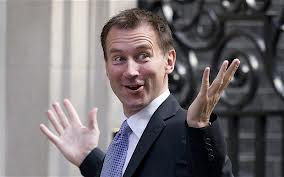 . Did the reshuffle do anything dramatic? As per usual, after all the excitement things are not that much different. If I try hard to pick the bones out of it, I'd make the following points:

1. Cameron has tried to solve specific problems with his appointments: a) the odious Grant4 Schapps (or alternatively 'Michael Green') is highly plausible and a typical Cameron decision was to use him to replace the politically naive and ineffective Warsi as party chair; b) Justine Greening has been moved presumably to facilitate a third runway at Heathrow, something right-wingers claim will assists growth; c)Ken Clarke has been moved to assuage those on the right who have wholly disagreed with his sensible penal policy reforms.

2. Jeremy Hunt has astonishingly been saved. Great to see the back of the egregious Lansley though Hunt, as my picture suggests, was as gobsmacked as the rest of us who felt his shameless arse-licking of Murdoch should have earned him only the order of the boot. Now this politician, apparently devoid of any sense of honour, and someone who opposed any celebration of the NHS in the Olympics' opening ceremony, has been put in charge of our most treasured national institution. Shame on you Dave.

3. Most of the big beasts remain in post: Hague, May and of course Osborne. As Ozzy was advising Dave it's natural his job should have been left untouched- despite being the one person voters would have liked to have seen shifted and the recipient of public boos at the Paralympic Games. Still, his pathetic strategy will no doubt continue to run into the sand as the economy stumbles from double dip to an even more debt ridden condition. No doubt he will not welcome the advice of wise old Ken in his new economic advisory Cabinet role.

4. IDS (bravely) refused to shift from his WPP post, determined to continue his quest for a more rational benefits structure and to resis the mooted further £10bn cut in welfare payments.

5. The 'new talent' which allegedly crowded onto the Tory benches in 2010 is rewarded as expected e.g. Liz Truss, Daniel Poulter and Anna Soubry.

6. The Lib Dems seem to have got very little out of the reshuffle. Admittedly, their Cabinet posts have been left untouched, they have seen the able Norman Lamb moved to health and the even more able David Laws is back in government at education (though not in Cabinet); (how will he get on with Michael Gove?). But with the right-wing Owen Paterson and Chris Grayling now sitting around the Cabinet table Lib Dems will find their liberal values marginalised. Maybe Clegg failed to fight sufficiently hard for his corner or maybe Dave just didn't bother to listen to his advice?

These changes are not totally insignificant but they are unlikely to transform or initiate real change. Cameron had to replace certain colleagues and his party is now so right-wing it was inevitable that any 'shake-up' would pull in more right-wing Tories. Cracks will continue to be papered over and the coalition will continue to limp along, resolving nothing and involving two parties, hovering like sprint cyclists, both waiting for the moment when they can cast the other adrift and strike out for a position which will maximise electoral support. 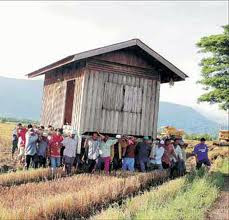 Sorry not to have posted recently; I have been very busy moving myself over the Pennines from Stockport to Leeds to move in with Carolyn my partner. In fact soon to be wife on 15th September; another break in posting for that and following honeymoon in Carcassonne, near Toulouse. No doubt I'll find something to say about the reshuffle tomorrow.....