Has Chester's Labour MP Given Up the Fight for her Marginal Seat? 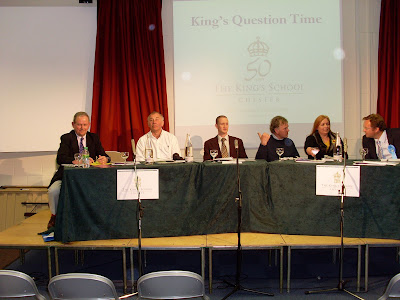 I was pleased to be invited to a 'Question Time' event at The Kings School, Chester last night- see picture left. All the candidates were there- right to left: Stephen Mosley(C), Lizzie Jewkes(LD), Tom Barker(Green) and on the far left Alan Weddell (UKIP). I am in between the chair- John Heap and the UKIP guy. But where was the sitting Labour MP? Christine Russell(picture right), it seems was too busy campaigning elsewhere to attend this hustings type event. So the field was left open to the Tory- not as bombastic as some but still bombastic(though, to be fair with some redeeming charm) and the rest. I thought she made a bad mistake with BBC cameras there too. OK, her majority is only 915 but the splendid Lucy Powell, is fighting a marginal in Withington against the Lib Dems with great energy and optimism.

Some Labour supporters told me Christine has virtually given up. If she has this relfects badly upon her. If she did not intend to campaign vigorously she should have stood aside and let another more energetic candidate have a go. With a UKIP and English Democrat standing too the Tories were by no means a shoo-in. But they may be now.