Who is to Blame for the Crisis? 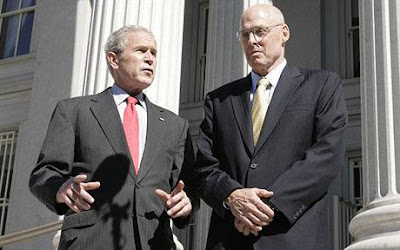 Occasionally a time happens- and this is probably one of them- when you feel a watershed in being passed. The global financial system has ben found wanting and no-one quite knows what will happen; it seems nothing will be quite the same again. So I thought I'd try to identify the reasons why things have gone so irrevocably pear-shaped over the past year or so. I have written a longer briefing on this topic elsewhere but here I'll confine myself to pointing fingers at a few culprits, some well known, others less so.

Ideology
The 1970s were a turbulent and unhappy time for the left: high inflation, unemployment, union power excessive and living standards in decline. Thatcher and Reagan came into power determined to allow market forces to 'work their magic'. Over here this meant crushing the unions, privatisation, slashing taxes and deregulating financial dealings via the Big Bang. These steps helped to launch trading in shares and securities to phenomenal heights and racked up levels of debt in the way investment banks operated. These changes also introduced the City bonus culture and the arrival of the 'super-rich'.

Subprime Loans
Faced with a glut of investment during the 1990s US banks hired it out to initiate a boom in home buying. Urged by government to help the low paid, just about anyone qualified. Some loans were given on the basis of 'no income, no job, no assets' or 'ninja' loans. Often they came with 'teaser' discounts of 4% or below, set to double after a couple of years. It followed that irresponsible lending like this caused an avalanche of foreclosures, rising from a quarter of a million in early 2007 to three quarters of a million in mid 2008.

Securitization
The secondary mortgage market has long existed. This entails mortgages being sold on, like IOUs, to investors abroad who hope the income stream of payees will realise a profit for them. In the past this has worked perfectly well. However these subprime loans loans were dodgy so financiers wrapped them up with good loans in Collateralised Debt Obligations which were so complex few could separate the good from the bad. By now, the 'build my bonus' culture was such that few bothered to look too closely and these toxic CDOs flooded the world's financial system. As debtors in the US began to cease paying, however, the extent of the problem slowly became obvious.

Underwriting High Risk Mortgages
Underwriters are the people who assess the degree of risk attached to loans regarding the borrower's ability to repay. Assessments used to take a week but a near automatic electronic system was introduced in the USA which completed the job in 30 seconds. These guys carry a heavy burden of responsibility in the wake of the crisis.

Credit Agencies
These bodies assess the credit worthiness of issuers of securities plus the securities themselves. Their incompetence was fully demonstrated by the case of Enron but in the euphoria of constant growth and huge bonuses they alolowed their eyes to be taken way off the ball and the CDOs were often given triple A ratings. These agencies also carry a heavy responsibility.

The Bonus Culture
Finally, as we all are now aware, bankers became transfixed by the ridiculous sums they could make if they acquired sufficient business for their firms. Close scrutiny and caution- the once hallmarks of bankers- gave way to a desperate desire to acquire that parking space beneath the skyscraper HQ in Wall St or Canary Wharf, for the new Ferrari. The super-rich thought nothing about spending a £100mn on new yachts or even private submarines to swank their way around the world's pleasure spots during vacations or a hugely early retirement, funded by all those bonuses, companies bought and sold.

Simon Jenkins suggested a week or so ago that a tribunal into the crisis was required. Well, he could fill up his dock from the above three categories with no trouble and if public executions were still allowed many would gather at Tyburn to watch those responsible breath their last. However, there is a problemette here. There is another group of people responsible and this is a huge one: all those people who exploited cheap money by loading up with chronic debt, which they now find they cannot sustain by further borrowing. We are all complicit, to a degree in what has happened and, I'd guess, will have to return to a much more sober and cautious way of spending from hereon. If you need a mortgage, you might even have to spend an awkward hour or so in the bank manager's office, as my generation had to back in the 1960s and 70s.

Comments:
Of course I disagree with most of this.

Ideology. Markets have "worked their magic since Reagan and Thatcher. If you had died during Jimmy Carter`s Presidency(and many no doubt wished for it at the time), and came back today, you would stunned at the progress made. And this is ENTIRELY due to the believes of these two. And in between that they destroyed Communism forever, even though we were told well into the 80`s that the USSR was there to stay and we should deal with it. But then the Left have always lacked moral fibure(witness Iraq).

Subprime Loans. You are right here. Clinton and the Democrats are to blame here, with their loony PC laws and their deceipt. People were given loans they should never have had, solely because the PC brigade insisted on it.

Securitisation. A great idea. If a company employs someone foolish enough to buy contracts that they don`t understand...then the company goes bust and the shareholders(who were foolish enough to invest in such a company) lose their money. No problem here.

Credit Agencies. Not to blame because noone took a blind bit of notice of them. No point in these.

The Bonus Culture. I have touched on these already. You get a bit carried away here Skip, with the bit about yachts and the rest(sounds more like the Socialist Worker). Most of my banker friends spend their bonuses on getting their kids into a decent school, away from the fleepit comprehensive in the area. Unfortunately for the goos on the left, they spend their wages in very boring ways.

As for the bailout. No thanks. Let the market correct itself. Let institutions fail if they must. But DO NOT bind the taxpayer to committments that they neither deserve nor can withstand. If I paid any UK tax, I would be furious about this.

Michael
We've seldom minced words in our exhanges over the years, but it seems to me your apparently quasi- religious belief on the efficacy of markets reflects one of the reasons why the crisis happened in the first place. It is precisely such excessive faith which led financiers to play so fast and loose with their complex products and promiscuous credit.

You must be in a very tiny minority in thinking letting banks go bust would have solved the problem. The markets are NOT naturally self adjusting and DO need the help they are getting.

Having said all that we do seem to agree on a few things(subprime, securitisation etc). But your defence of the bonus culture rings hollow. In 2006 £8.9 thousand million was spent rewarding City dealers, brokers etc. My brother who works in the banking sector as a consultant, tells me bonuses have provided incentives which have indeed distorted the way banks operate, something commentators on left and right have been saying for some time.

Finally, I've never read the Socialist Worker but, in my study of politics I've come to realise most bodies of ideas reflect the truth to some extent, even if only small ones. If SW people argue City financiers receive excessive rewards for the work they do at a level which is(probably best to say 'was', given the climate) obscenely unfair, I would find it hard to disagree. Though I'm sure you would.
Cordially
Skpr

I respect your opinion Skipper. As usual, your analysis would have more support in public opinion terms than mine would. Though that might be because I don`t attempt to sugercoat things(though nor do you to be fair). Being in a minority on these things is probably for the best. The average punter(and indeed many in the city), know nothing about markets and economics in general. I have made a tidy profit on almost all of my investments throughout this period(suffice to say I won`t get to spend most of it). So my beliefs have been borne out.

My faith in markets is not as great as you think. I have no faith in them at all(at times they are bonkers...your analysis was right to mention false incentives, the key to the banking explosion. But then these banks will be punished, and the employees will be rewarded for expoliting the incentive). Markets merely exist, and always will. And meddling in them never comes to any good.

This whole crisis was caused not by markets, but by governments. And the cause is very simple. US/UK and the second rate Eurozone cut rates after 9/11, and didn`t correct them. GOVERNMENT could and should have turned the tap of on these cheap loans. And didn`t. They sat back and let house prices lose all relationship with reality and consumer debt go out of control. The behaviour of firms and consumers was entirely predictable, and in line with previous behaviour in these circumstances.

Both Governments will pay the price(at the polls alas, not financially). Bush, although I like his instincts, failed in this area, and Obama looks likely to reap a undeserved a dangerous benefit(although only dangerous if you care for the US and decent values). Brown is now seen for the charlatan he always was. Bankers will lose their jobs if they or their firms made mistakes. Hedge funds who invested in risky stocks will be wiped out. People who bought houses at unsustainable prices and took unsustainable credit will lose their homes. Let their fate inform the market.

The only innocent loser in all this is the taxpayer, who is set to be royally fleeced with the greatest stealth nationalisation in UK history. I pity them, because the real recession hasn`t even begun. Things are going to get MUCH worse. House prices are not yet half way to where they need to be. Unemployment should rise from 1.6m to at least 2.5m and probably 3m. Your post above, about Brown winning an election in such circumstances is either very wishful or great wit.

Maybe I didn`t explain the point about the SW so well. It was merely your mention of yachts and the insinuation that bankers and finacial service workers spend their bonuses on such things. It is misleading and merely builds on falsely held beliefs most of these gormless characters have.

Michael
I feel we must be arguing a little at cross purposes as i agree with almost all of what you say in your cogently argued response.